Payments will be made by the Stockholders residing in Alexandria, into either of the Banks of the town, and in the country, to the following agents, viz:

For the County of Prince William -- To Mr. Thomas B. Gaines.

For the Count of Warren -- to Messrs. Samuel Richardson, William Cook, and William Miller.

By order of the Board; 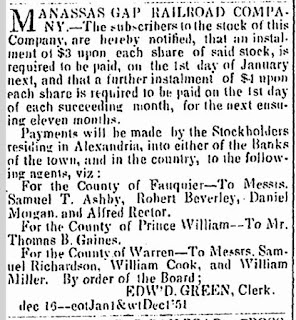 Posted by Carolyn at 2:30 AM No comments:

At Oakland, Prince William county, Va., on Wednesday morning July 12, 1871, Mrs. SINAH ANN NEWTON, wife of Geo. P. Wise, esq., and youngest daughter of the late Wm. Newton, esq., of Alexandria, Va. in the 64th year of her age. The unwavering faith in a Saviour's love, which sustained her through the vicissitudes of life, grew brighter as the final change approached, leaving upon her lovely face a radiance that spoke of heavenly companionship, while the air about her seemed balmy with the breath of God.

[Sinah Wise is buried beside her husband in Presbyterian Cemetery, Alexandria, Va.  She was the daughter of William and Jane Barr (Stuart) Newton. ~ cgl]

Know all men by these Presents that I, Robert A. Keys a citizen of Prince William County, and state of Virginia, being a householder and head of a family, and being desirous of claiming the benefit of the provisions of chapter 178 of the Code of Virginia of 1887, and amendment thereto under the pursuance of the state constitution of 1867, entitled exemption of property of a householder on head of a family from levy, seizure, garnishment or sale, for debts or liabilities on contract, by this deed made on this the 6th day of October 1890, do declare my intention of claiming such homestead on the following property, owned by me to wit:

12 acres of land at Brentsville, Va. upon which I now reside, and which was purchased by me from J. B. Reid & wife.

Which said property selected and designated and set apart, I the said Robert A. Keys by virtue of the provisions of the chapter aforesaid of the Virginia Code of 1887, claim to hold exempt from levy, seizure, garnishing and sale.

Witness the following signature and seal

Witnesses to the signature of R. A. Keys

This Homestead Deed of Robt. A. Keys was presented to the Court, acknowledged by the Grantor and was ordered to be recorded. 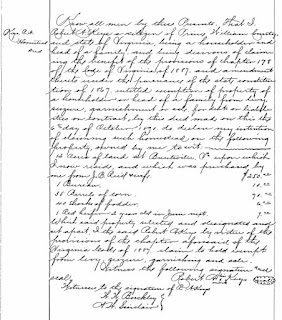 Posted by Carolyn at 2:30 AM No comments:

PRINCE WILLIAM COUNTY ITEMS -- A terrible gloom was cast over the festivities of Christmas day by the sudden and unlooked for death of Mr. Wm. C. Broughton, a young man highly respected by his friends. He was taken ill early in the morning and died at about two o'clock in the afternoon, being in a lethargic and unconscious state from the time of the attack until his death.

At a public sale of horses at Brentsville on Monday last, a tolerably respectable animal sold for $5.50, and another, rather advanced in years and decrepid in limb, was knocked off at four dollars.

St. Stephens Episcopal church, near Catlett's, which was destroyed during the war is shortly to be rebuilt.

S. C. Neale esq., of Alexandria has been admitted to practice in the County Court. -- 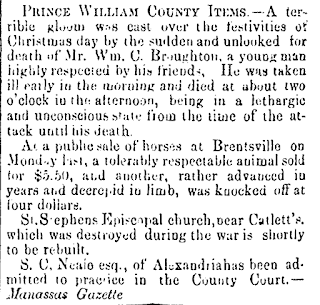 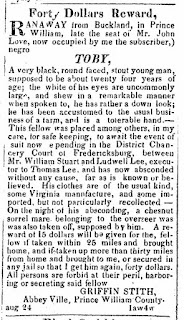 RANAWAY from Buckland, in Prince William, late the seat of Mr. John Love, now occupied by me the subscriber,) negro TOBY, A very black, round faced, stout young man, supposed to be about twenty four years of age; the white of his eyes are uncommonly large, and shew in a remarkable manner when spoken to, he has rather a down look; he has been accustomed to the usual business of a farm, and is a tolerable hand. -- This fellow was placed among others, in my care, for safe keeping, to await the event of suit now pending in the District Chancery Court of Fredericksburg, between Mr. William Stuart and Ludwell Lee, executor to Thomas Lee, and has now absconded without any cause, far as is known or believed. His clothes are of the usual kind, some Virginia mannufacture, and some imported, but not particularly recollected -- On the night of his absconding, a chestnut sorrel mare belonging to the overseer was also taken off, supposed by him. A reward of 15 dollars will be given for the fellow if taken within 25 miles and brought home, and if taken up more than thirty miles from home and brought to me, or secured in any jail so that I get him again, forty dollars. All persons are forbid at their peril, harboring or secreting said fellow.
GRIFFIN STITH,
Abbey Ville, Prince William County
aug 24   1aw4w
Posted by Carolyn at 2:00 AM No comments: 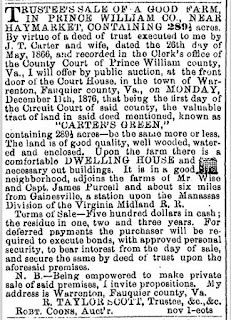 TRUSTEE'S SALE OF A GOOD FARM, IN PRINCE WILLIAM CO., NEAR HAYMARKET, CONTAINING 289 1/2 acres.  By virtue of a deed of trust executed to me by J. T. Carter and wife, dated the 26th day of May, 1866, and recorded in the Clerk's office of the County Court of Prince William county, Va., I will offer by public auction, at the front door of the Court House, in the town of Warrenton, Fauquier county, Va., on MONDAY, December 11th, 1876, that being the first day of the Circuit Court of said county, the valuable tract of land in said deed mentioned, known as "CARTER'S GREEN," containing 289 1/2 acres -- be the same more or less. The land is of good quality, well wooded, watered and enclosed. Upon the farm there is a comfortable DWELLING HOUSE and necessary out buildings. It is in a good neighborhood, adjoins the farms of Mr. Wise and Capt. James Purcell and about six miles from Gainesville, a station upon the Manassas Division of the Virginia Midland R.R.

Terms of Sale - Five hundred dollars in cash; the residue in one, two and three years. For deferred payments the purchaser will be required to execute bonds, with approved personal security, to bear interest from the day of sale, and secure the same by deed of trust upon the aforesaid premises.

N.B. - Being empowered to make private sale of said premises, In invite propositions. My address is Warrenton, Fauquier County, Va.

Posted by Carolyn at 2:00 AM No comments:

Carolyn
I'm a Philly gal, born and raised, who relocated to Virginia before being bitten by the genealogy bug and discovering Virginia ancestors dating back to the Revolution.